Holiday village by the sea in close proximity to Ustronie Morskie. Former village name used until 1945 is ZIGENBERG. Formerly a small fishing village, is currently visited with pleasure by vacationers and tourists. A friendly and warm atmosphere of this village makes Sianożęty the dream holiday destination for rest and good for active relaxation.

Great benefits of Sianożęty are :

The village characterized by a mild climate and large amounts of curative iodine. The climate of the village Sianożęty is described as a maritime climate of moderate intensity of climatic stimuli. A specific feature of the bioclimate of this region is the presence of iodine in the air with its healing effect, especially in the treatment of diseases of the respiratory tract, thyroid and circulation identifies. The content of iodine in the air lies between 0.75 to 2.53 microgram/mm3, thus achieving the highest values in terms of maritime climate on the European continent.

Sianoęty is a lovely watering place located in the central part of the coast of the Baltic Sea, 10 km east of Kołobrzeg and 1,5 km west of Ustronie Morskie.

Airport Bagicz – since its creation a strategic military object, closed to visitors. Currently a post-military special little town, where the German, Soviet and Polish history are woven together. A decaying monument to a past technical thought – full of riddles. 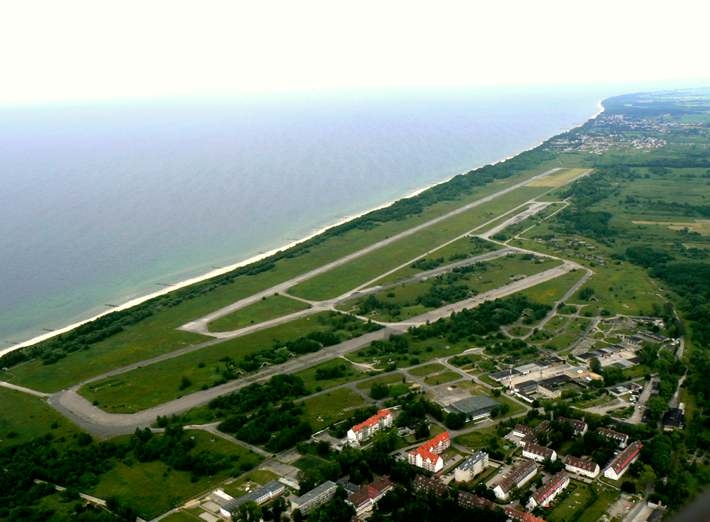 Before the Second World War in Bagicz an airport for the Air Force has been built here in September 1939 launched aircraft to attack Poland. After the airport was taken over by the Soviets, the Red Army has fitted its center by the expanded airport. For a long time stationed here hunting bombs aircraft Mig-23. After an accident to which it came in half of the 80s the hunter – attack – regiment 871 was criminally linked to the airport in Brzeg …

Hortulus Theme Gardens in Dobrzyca were founded in 1992. They are being continually accomplished ever since. New gardens and new compositions are being added every year. At this juncture they occupy over 3 hectare in total. The idea behind our gardens is to show arrangements of plants in garden compositions as well as their practical application in each garden (hence the lack of labels with their names). Expect the obvious benefits of contact with nature, the visitor is also exposed to sensations of aesthetic and spiritual nature. With this idea in mind we have classified all the gardens, depending on their theme, including classic (Japanese, French, Mediterranean), those associated with nature (stone, rockery, and water) and functional (herbal and vegetable). There is also a large group of english-style sensual gardens that aim for visual stimulation as in the following examples of the colour gardens: White, Blue-Yellow, Lilac-Pink, Purple and Fire, the Shade and the Sun garden.

Comes a good tourist to Ustronie Morskie, it will be easy for him to find the road signs.

A part oft he European Route from the Atlantic (from Brest in France) to Braniewo in Poland. The tourists are hiking starting in Ustronie Morskie into two directions:

In Rusowo /10 km/ is he Church of Our Lady of Rosary located, it is one of the oldest Christian temp les in Pomerania – over 600 years old!

Not far from the church, in the court parking can be discovered natural monuments: limes, ashes, oaks and a platan “Antoni”, one of the oldest trees of this kind in Poland. In the park is also a part of building remaining a tower of a Crusader castle with a water ditch around it, and parts of palace architecture – an outline of the history of the palace of the family Damitz and later family Schröder. In the park we find relax arranged places. The trail passes through a field road, fields and meadows and along lonely farmhouses.

The sky blue trail to the oldest oaks in Poland

The path leads towards the Kolberg Forest, where you can discover the richness of nature. Numerous swamps with vapors over their surface are reminiscent of the virginity of the large forest complex. Right here is growing the oldest oak in Poland called “Bolesław”, which age was determined during dendrochronological investigations in 2000 at 800 years. 2 km further rises its younger accomplice “Warcisław” – 640 years old. It’s being told the wind is singing old stories in the branches of old trees… Who knows, maybe it is you to hear a song from another time ….?
Source:
www.ustronie-morskie.pl/index.php?page=turystyka⊂=szlaki

Here you can buy fresh fish directly from a fishermen. In addition, on a high dune rises a beech wood. This is a collection of more tenth rarely in Poland occurring beech trees with a characteristic gray – dark gray bark.

A stylized 19th century object (Prussian wall, thatched roof). The Museum of Bread is above all a place, where you can taste real bread, that is baked according to old Polish recipe: Sarmatian, buttermilk and Seniors Bread, often baked on cabbage and rhubarb leaves. It is also a place where you can switch off with relaxation music. The heart of the Museum of Bread represents a 120 – year-old bread oven. In the Museum of Bread are many, the history of bread making illustrating objects, including ancient grinding stones on which a hand full of corn can be grounded, manual bread slicers. On large wooden benches one can sit down and order a slice of bread with “Grandma’s Isia schmalz” or dishes from the oven bread. A specialty of the Museum of Bread is a leaven soup (Żurek), served in bread, also bread acid, unfiltered beer, dry wine and other hot and cold drinks. One can buy here dandelion honey, goat’s milk and sausages from a farmer.

Bornholm is a small Danish island in the Baltic. It has an area of 588 sq. km, 150 km of coastal line and 40 km distance between furthest capes. It is located just 100 km from Kołobrzeg. The island is a dream place for cyclists who want an active holiday. Many choose this means of transport thanks to convenient and safe cycling lanes that cover the island in a dense web. Short distances between sights of interest are an advantage. Bornholm is a place where nature and culture join in harmony. The number of historic buildings is impressive. The most precious are white, Roman, rotunda-shaped churches dating back to the 12th century, the only ones in Scandinavia, and the biggest stronghold in Northern Europe, the ruins of the Hammershus Castle and a maritime fortress on the stony island of Christianso located about 18 km off the coast of Bornholm.

The inhabitants of the island bid warm welcome tourists. They do their best so that unforgettable memories would make them come back. Holiday makers are offered comfortable hostels, camp sites, holiday cottages and beautiful hotels. Most sophisticated palates shall be catered for by numerous restaurants, bars and cafes. It is at every turn that you can come across charming villages and picturesque fishing settlements. Both the day of today and modern technology go hand in hand with mysterious past enchanted in the remains of the past. While roaming the island you must visit one of the numerous craft shops and traditional fish smoke houses to try local delicacy being smoked herring.

We want to convince all our tourists to an active recreational use. To help you in choosing the appropriate form of reaction see the list below.